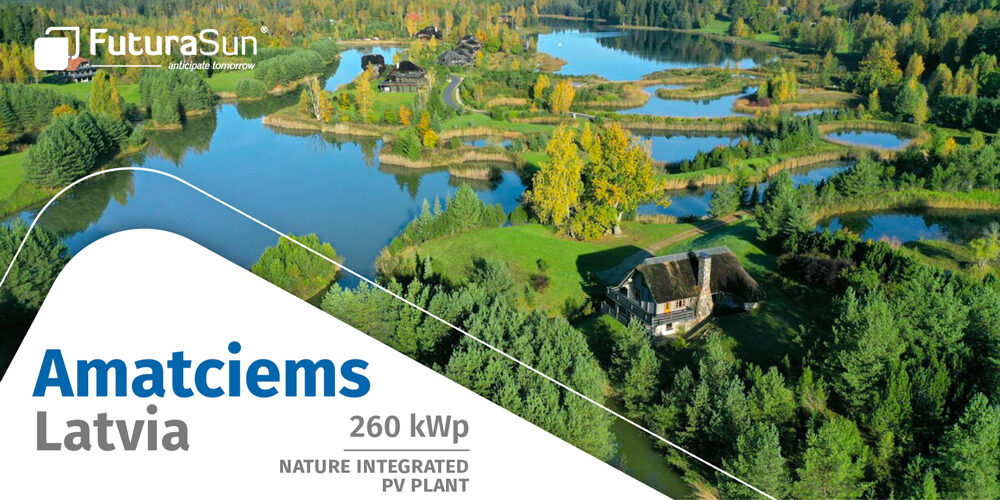 A fully nature integrated PV plant in the picturesque village of Amatciems, Latvia

It is the first power purchase agreement (PPA) for solar panel project of such magnitude to be implemented in Latvia and was made possible with the help of a loan worth 170,000 euros from the ALTUM financial institution. The project was realized in cooperation with the energy company group AJ Power. 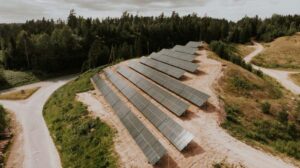 During the execution of the project, 720 FuturaSun solar panels with a total system capacity of 259 kW were set up in Amatciems. It is estimated that they will produce 256,600 kWh of green energy annually, or 17% of the power consumed by the village. The solar park will also reduce CO2 emissions by 100.7 tons annually, which is equivalent to driving 500,000 kilometres by car.

For this particular project the FU360M SILK® Pro All black high efficiency modules of FuturaSun were chosen. SILK® Pro is a series of monocrystalline PV modules with MBB half-cut cells of size M6. The module series is distinguished for its high efficiency, good temperature coefficient and also for higher yields in the event of partial shading or dirt present on the surface of the module, guaranteed thanks to the two independent sections. SILK® Pro is available also in ALL BLACK version with an elegant monochrome design to meet up with particular architectural needs like for this specific installation.

The Amatciems project was implemented by the largest private group of energy companies in Latvia AJ Power, which provided a full service solution from attracting financing to preparing and implementing the project. The service provider is also responsible for the operation of the power station, its maintenance and guarantees. 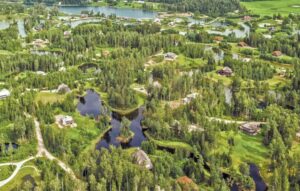 “Amatciems solar panel park is currently an absolutely unique project of this kind to be implemented in Latvia. While implementing this idea, we successfully found a way to make a rational use of the mountain slope in the area. Adapting the hillside to the project is an innovative solution, because during the construction work we put into practice previously unused techniques in order to adapt to working on such uneven terrain. In addition, the solar plant architecturally depicts the shape of a mountain, which further integrates it into the overall architecture of the village, creating a particularly impactful visual impression. We are pleased that we had the opportunity to implement the project together with Amatciems and ALTUM,” says the CEO of AJ Power, Roberts Samtiņš.

Also Lisa Hirvonen, sales engineer of FuturaSun, appreciates the harmonious integration ““The Amatciems village is a very good example that demonstrates that photovoltaics can be integrated in an harmonic way also in places with high landscape value without creating an unpleasant visual impact. In the village you live in symbiosis with the nature respecting in full the natural ecosystem and the animals living there. Amatciems is indeed an example to promote and take inspiration from for a more sustainable tomorrow ”

The project has also successfully participated in competition Sustainability in Architecture, Construction, Design 2021, and garnering acclaim in category “The Most Sustainable Project”.